Friday Was A Big Deal

The Giants are in "must win now" mode and it shows after Friday's dealings. The big deal of the day was re-signing Franchise Tagged Jason Pierre-Paul to a new 4 year deal which also helps their tight cap space. Maybe giving them a chance to run at DT Jonathan Hankins and keeping last years dominating D-Line intact.

I think JPP earned his worth last season with decent numbers of 7 sacks, 3 Forced Fumbles and a TD despite his hand issues. At times he seemed to make a bigger impact on a game then most noticed. I even thought he played well enough to earn Comeback Player Of The Year honors.

To celebrate the big re-signing, here are some recent additions of JPP to my PC I just put in the Giants binder today, 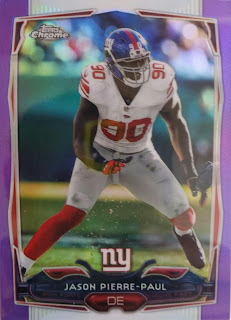 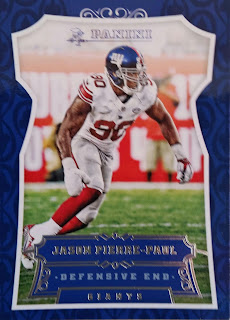 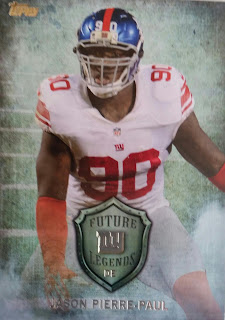 JPP wasn't the only Friday moves....

Two other moves was a re-signing of backup QB Josh Johnson and another later in the day when they agreed to terms with QB Geno Smith if he passes the physical by Monday. I think Smith still has NFL talent, but was just put in the wrong locker room situation. The Giants have been known to take flyers on guys with some troubled pasts before like Kerry Collins and David Carr and did well with them. Collins actually took them to the Super Bowl. Maybe by the time Geno sits behind Eli for a few years, he matures into a better QB. I can only hope.

I also hope Geno makes a comeback because of this card I pulled from a Fleer Retro autograph pack back in 2013. 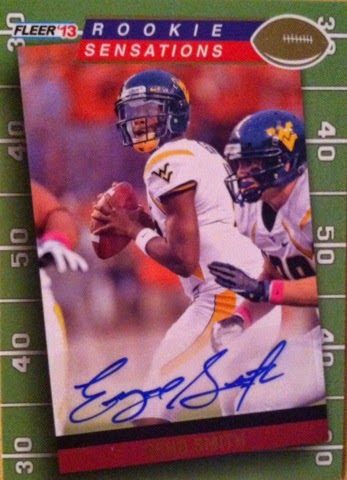 These moves on Friday go along with other key offseason moves with the signing of WR Brandon Marshall, OL D.J.Fluker, and TE Rhett Ellison. I expect more to come and especially in the running back department. That should be an interesting one to watch.
Posted by Sport Card Collectors at 6:00 PM