Giants In The Mail: A Trade With Dub Mentality

There are days on Twitter when I have extra time I will hunt down other bloggers, the ones who I know are on Twitter, and see if I have missed any of their blog posts and try to catch up on reading them.

When I went to check out @DubMentality for any new posts he may have put up, I suddenly remembered he had once posted a Sterling Shepard autograph he had for sale I needed. So I looked back through his tweets and came across the card assuming it had sold. Well, come to find out, it hadn't. He had a good deal on the card but once again, my budget isn't currently allowing me to buy any cards.

So I inquired about doing a possible trade and luckily he agreed that was fine. It also didn't take long before I was able to work something out with him. He was very easy to trade with which alone in itself is awesome.

The card I had wanted was this cool 2016 Panini Origins on-card autograph of Sterling Shepard. It's a card I have wanted for awhile now. And of course any addition of Sterling Shepard is a plus as this guy showed a ton of potential this season and should only build off from it next year with the addition of Brandon Marshall alongside Odell. I expect him see plenty of targets with defenses focused on those two. 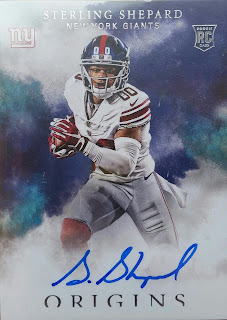 I really like the look of Panini Inception, I mean Origins, with the color scheme and design. The only nag I have about the card is the 00 on the jersey. Something that has been my hobby pet peeve for years.  Overall though, nice looking card with the on-card auto bonus.

A big thanks goes out to @DubMentality for willing to work out a trade. If you haven't followed him yet on Twitter or checked out his blog yet, please do so. Many interesting reads you will need to catch up on. You can find him over at http://www.dubmentality.com/
Posted by Sport Card Collectors at 2:00 AM