Big Blue Collections Part 3: I Am Such A Potato Head

Big Blue Collections is my latest segment here on Snagging Cardboard that showcases non-card items in my NY Giants collection.

I would assume most of us growing up owned or at least played with a Potato Head at some point. You know, those fun round plastic potatoes with holes for you to insert their body parts into? Yeah, they can be a lot of fun especially when you start inserting the wrong parts into the wrong places. Who doesn't like to have a set of teeth as an eye? Or two noses instead of ears?

A few years ago Potato Heads were released for every NFL team. Something I didn't know about until I got one for Christmas. At first I was like, you kidding me, a Potato Head? Is this a cruel joke? Then I opened it and put the pieces together-all in the right spot because as an adult OCD kicks in when you put them in the wrong spots- and actually found it kinda cool. 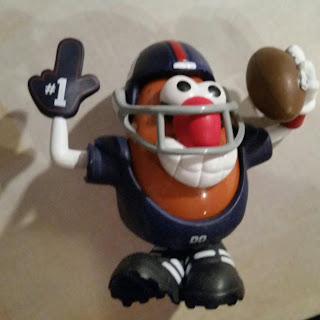 Here is a side/backside angle of it. The jersey number is 00 so Panini must had done a rookie photo-shoot of it. 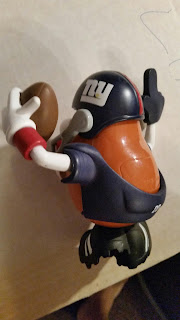 I have yet to take the Potato Head apart again. It resides on my man cave shelves.

If you were curious where they sell these if you wanted one of your team, it seems Amazon carries them for less than $15. So could be a cheap pick up for your collection if you like oddball items.
Posted by Sport Card Collectors at 2:00 AM