Giants In The Mail:Mystery And Suspense!

Last Sunday, I showcased my trade mail day from Dub Mentality Blog, but what I didn't tell you was the backstory behind it. A story of mystery and suspense which led to today's Giants In The Mail.

It was a dark clear night. The moon was full and the stars twinkled brightly. The USPS driver had just picked up my trade package from the post office near Dub Mentality and it was in transport to the next post office destination.

A few miles down the road the driver noticed a bright light in the sky and pulled over to see what it was. Was it a shooting star? Was a planet being pulled into orbit? Or was it more.....Maybe.

The driver got out of his car to see if he could get a better look when the light got so bright it blinded him and he fell to his knees. Within seconds it was over and he could see again. The bright light in the sky was gone and he found himself back in his vehicle. It took him a second to calm down from fright, but he continued on his way shortly afterwards just wanting to leave that area before anything else weird happened.

When he arrived to the next post office, he told the receiving worker what had happened and upon getting ready to unload the mail bags and totes from the back of his vehicle, they were missing.....

When available, I like to track my packages online to monitor when it should arrive. I like to make sure to grab my packages from my mail box immediately because the person who drops them off will sometimes leave them outside my mail box in all kinds of weather. You know, snow, rain, strong winds. My packages have already seen it all even after I complained.

So I kept track of my package for a few days and noticed it wasn't moving. I thought maybe it was delayed because of weather issues the area had experienced but gave Dub Mentality a heads up just in case.

We gave it a few more days. No updates.

It was pushing Day 5 without any updates and Dub checked in with me to see if it had arrived. I told him it hadn't and so he offered to send me another card even though it wasn't his fault at all. It was once again in the hands of the USPS system which none of us could control.

I told him many times he really didn't have to but he said he wanted to so he sent me a pic of this card he was mailing. Pretty sweet. Nice patch and I have always been a fan of Certified. 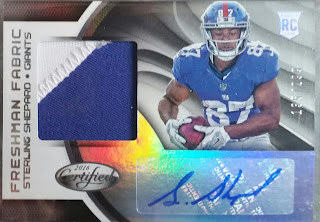 So he packaged this one up hoping that it would arrive since neither of us was sure the other would.

Day 7 still had no tracking update for the package. It was becoming evident that something had happened to it. But, what?

⇛⇛⇛⇛⇛⇛⇛⇛⇛⇛⇛⇛⇛⇛⇛⇛⇛⇛⇛⇛⇛⇛
Gork Mailderson the leader of the Aknoids, searched the USPS packages he had beemed up to the mother-ship thoroughly looking for his lost package intending to go to another space buddy as they knew how the postal system worked even in space. He had gotten word that his package got to earth somehow.
But, frustratingly enough, it wasn't in this round he had taken. So he would have to snag another.
Just like with all of the other packages he had snagged in the past, he knew the mail had to go back to earth before someone tried to figure out where it disappeared to. He knew it take a week before someone would finally check into it.
In a quick beam of light, he made sure that every package individually got to their closest destination so they would be delivered the next day. Or at least he had hoped.....

⇛⇛⇛⇛⇛⇛⇛⇛⇛⇛⇛⇛⇛⇛⇛⇛⇛⇛⇛⇛⇛⇛
The next day, just like the previous 7 days, I updated my tracking again. Boom! Finally it was updated but the package had arrived at another USPS facility in my state. Not one that my mail normally goes through. But, I didn't care. I knew it would finally be coming to me and that it was hopefully safe.

You all know how the story goes after that as the package arrived safely and I posted it HERE, last Sunday.

The Sterling Shepard I posted above, was not beemed into space and arrived in just a few days like the first one should have. A big thanks goes out to @DubMentality for his generosity in sending it my way even though it was not his fault that my package went missing for a week.
I am just glad that Gork was nice enough to ship it back to earth. A thanks is due to him as well.
Posted by Sport Card Collectors at 2:00 AM