Well, with the Giants in a 1-6 hole with no hope left for the season, I at least have hope in my collecting of them ad I have added have ton of cards through trades this year.

When sorting those cards out and putting them away, i discovered I have quite the collection of Donruss Paul Perkins cards going on especially with 2016 Donruss Optic.

Maybe I should try for a rainbow? What do you guys think? 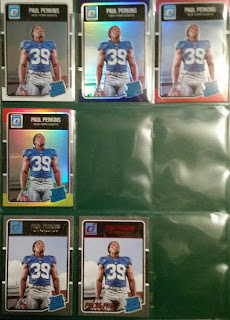 Posted by Sport Card Collectors at 10:39 AM No comments:

0-4. I don't have words for the 2017 NY Giants team anymore. They seem to want to win, but can't seem to seal up a win. The last two weeks have been the hardest. Watching the Eagles kick a 61 yard field goal by a rookie to end it. Ouch. It didn't help that the Giants punter muffed a punt to give them the field position to try it. Follow that up with a game I couldn't watch because Fox plays Patriot games where I live over Giants ones, watching my phone tracker show the Giants trail 13-0 early, coming all the way back to take a 23-22 lead and having the defense and punter again blow it late and lose by a last second field goal.

This week they face a 0-4 Chargers team that is just as antsy for a win as the Giants are. This game I can actually watch on CBS Sunday at 1pm and I expect it to be a fight to the end. Especially for the history between the two teams. Back in 2004, Eli Manning was drafted 1st overall by the Chargers but wasn't happy about it. So with the 4th overall pick the Giants drafted Phillip Rivers and traded him among a handful of 2005 draft picks to the Chargers for Eli. I would say the draft worked out well for the Giants for as much as they gave up. Eli has 2 Super Bowl rings and MVP's, Rivers has 0.

Today's post will remain cardless for today. Zero cards because of zero wins. If they can beat SD on Sunday, expect a much more upbeat post next week.
Posted by Sport Card Collectors at 10:30 AM No comments: